Art takes numerous forms, and one of the most celebrated is that of sculpture. For hundreds of years, sculptures have been built as a means of expression and celebration all across the world. Below, we take a closer look at some of the biggest ones from around the globe. Each one is representative of something special associated with its location and carries with it a unique meaning or story.

Thailand is well known for its statues of Buddha, and perhaps the most famous one is the Great Buddha of Thailand. Measuring 92 metres, the construction of the sculpture took 18 years to complete, beginning in 1990 and ending in 2008. Crafted entirely of cement and then covered in luscious gold paint, every inch of the sculpture was constructed according to the principles of Theravada Buddhism.

Statue Of Peter The Great

Measuring at 98 metres tall, Russia’s statue of Peter the Great, a former emperor who ruled the country for 43 years, faces the Moskva River in Moscow City. Designed by Zurab Tsereteli, a Georgian designer, the sculpture was created using 600 tons of stainless steel and bronze. The statue was unveiled in 1997 and has become one of the country’s most famous landmarks.

Located in Sendai, Japan, Sendai Daikannan is an impressive 100 metres tall. The sculpture is representative of the Japanese Buddhist Bodhisattva. It stands right at the top of a hill in Sendai and can be seen from several locations in the city. The statue holds in the jewel in her right hand. It is believed that this allows her to grant wishes. In her left hand, she holds a flask of water, which is representative of wisdom. Tourists can reach the top of the statue by elevator.

The great emperors’ Yan and Huang are commemorated by these sculptures, the construction of which started in 1987 and took over 20 years to complete. Located in China’s Henan province, they measure a height of 106 metres. It is estimated the government spent $22.5 million on their construction. The eyes of the statues alone are three metres wide, and the noses are six metres each. 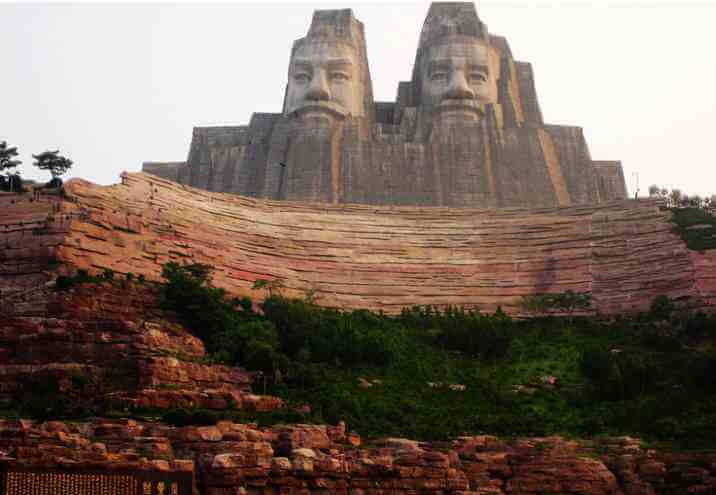 This statue’s name translates to “Great Buddha in Ushiku”. It is located in Japan’s Ushiku city, is 110 metres high, excluding its base of 10 metres, and is made entirely of bronze. Within the statue, there are four different levels. Visitors can reach the top of it via elevator. Once there, they can also view the beautiful gardens surrounding the sculpture. Or, if they are not a fan of heights they can stay on the ground and get their thrills at https://onlinebingoaustralia.co/.

The tallest statue in the world is the Statue of Unity in India. It was built in the likeness of Sardar Vallabhbhai Patel and measures a height of 182 metres. One would need to stack four Statues of Liberty on top of each other in order to reach just the head of the Statue of Unity. It is estimated that this sculpture cost a total of $200 million to create.